The Strathfield Light Pollution File.
A gallery of photographs documenting the extent and nature of  light  pollution in Strathfield and near by areas in the city of  Sydney, Australia.
contact: darkskyATcookeDOTidDOTau

*****News Flash*****  The Strathfield Council draft Vision 2020 received more submissions on the issue of light pollution than all other issues combined thus highlighting the great concern felt by the community regarding the environmental and human health impact caused by the recent exponential growth in the amount of polluting night time outdoor lighting now spilling unchecked into the night sky. Well actually....there were not any other submissions at all. What an apathetic lot we are! (2 July 2005)


The Strathfield Plaza Shopping Centre.  Environmental vandalism and a safety hazed. The sole purpose of these light bombs at the back of the centre seems to be to attract  the attention of the passing traffic. The glare which they produce would be illegal  if they were car headlights.  There are residential units directly across the road from these which would suffer considerably from light trespass! 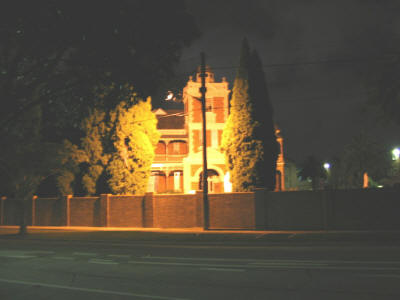 ...Father, forgive them; for they know not what they do. 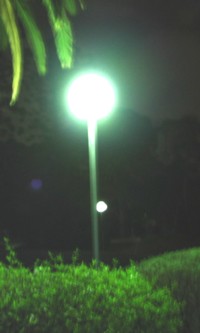 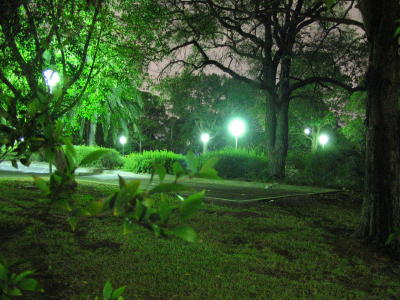 The car park of the ACU in Strathfield is filled with dozens of  totally unshaded high brightness  lights of the glass globe variety set on high poles. These lamps shine more than one half of their light output directly into the sky above. Not only is this illumination of the sky completely useless, it is a considerable waste of energy (and money).  It contributes considerably to the light pollution of the night sky and thus helps to deprive residents of Strathfield , deprive them of the joy  of viewing one of  God's great creation, the night sky, the firmament above and the jewels that it contains 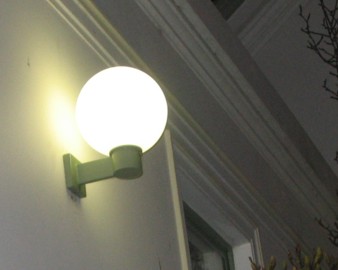 The Strathfield Council Chambers.
Do as I say, not as I do. The council has some extremely weak regulations which would not prohibit the installations seen here on the walls of council chambers since it does not glare to adjoining properties, only into the sky and to non adjoining properties across the road. In total there are nine such lights.

Strathfield DCP N0. 21 - Dwelling houses and Ancillary Structures. (In force from 1 December 1999).
2.8.2.4 Any external lighting is to be placed or shielded to prevent glare to adjoining properties. 6.1.9 Light fittings may be attached to fences which run along street frontages. Only small and discrete light fittings are to be used in such instances. Not more than 2 light fittings are to be installed per street frontage. Each fitting is to be maximum 60 watts. 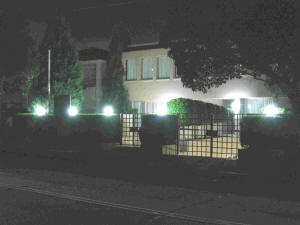 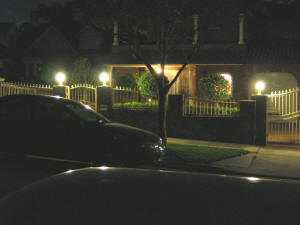 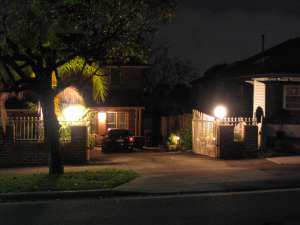 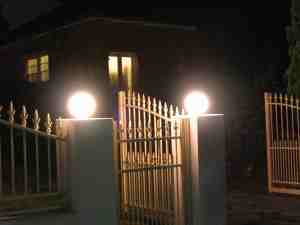 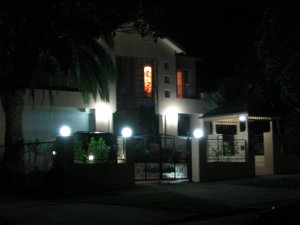 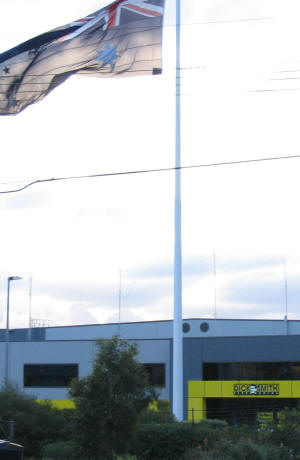 Proud corporate citizen of Australia, Dick Smith Electronics proudly flying the Australian flag. Unfortunately, it is lit at night by three high power spotlights facing directly up into the sky from the base of the flagpole. This is in accordance with the protocol issued by the Department of Prime Minister and Cabinet.
They would also be considerate corporate citizens if they were to take the flag down at sunset, thus avoiding the need for the energy wasting and polluting spotlights. Perhaps they are too lazy; but probably just ignorant of the effects of light pollution.

What a joke
NSW State Environment Protection Authority
devotes just four sentences to the issue of light pollution in their report State of the Environment 1997. 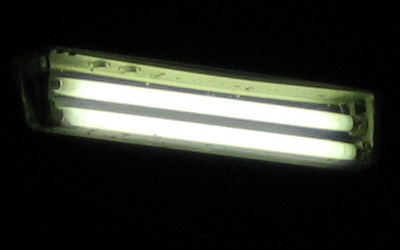 A major source of light pollution in Sydney is the obsolete twin fluorescent street lights - pictured on the left above. Energy Australia is in the process of replacing the old twin fluorescent, unshaded street lights with new shaded but not full cut off mercury vapour lamps - pictured on the right above example here . However it would appear that were it not for pressure from municipal councils they would still be installing the obsolete twin fluorescents see this document . One would expect a major electricity supply company to have been aware of the issues of light pollution many years ago.
Technology of the mercury vapour lamp
The mercury vapour lamp is still probably a second best choice. It is not the most efficient lamp available and it emits strongly in the blue end of the spectrum. Blue light is the worst form of light pollution since it has a greater deleterious effect on human health and is more of a problem for astronomical observatories than other parts of the light spectrum.
New York Blackout - SMH letters to the editor

Biological and health effects of light.
Lighting for the Human Circadian Clock. Recent Research Indicates That Lighting Has Become a Public Health Issue.
Dr Stephen Pauley, a retired endocrinologist, has written a paper on health issues of light at night. The hypothesis that the suppression of melatonin (MLT) by exposure to light at night (LAN) may be one reason for the higher rates of breast and colorectal cancers in the developed world deserves more attention. The literature supports raising this subject for awareness as a growing public health issue. Evidence now exists that indirectly links exposures to LAN to human breast and colorectal cancers in shift workers. The hypothesis begs an even larger question: has medical science overlooked the suppression of MLT by LAN as a contributor to the overall incidence of cancer?
Exposure to light at night may be implicated in the 50% increase in Leukaemia in children under five since the 1950s. Professor Russel Reiter, of the University of Texas, said at the first International Scientific Conference on Childhood Leukaemia in London  (8th September 2004) that exposure to light at night disrupts the bodys circadian rhythms and suppresses nocturnal production of the hormone melatonin. As an antioxidant, in many studies melatonin has been shown to protect DNA from oxidative damage. Once damaged, DNA may mutate and carcinogenesis may occur, he said.
Occupational Health
Martin Jennings outlines the potential adverse health effects that may be linked to the artificially lit working environment.

The environment.
The effects of artificial light at night on wildlife 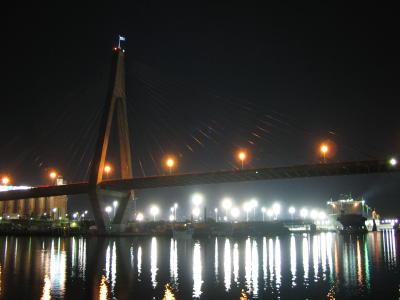 The Anzac Bridge in Sydney.

Photograph taken from over the water in Blackwattle Bay Park in residential area of Glebe. I believe that the bright lights seen under the bridge is the Conaust car terminal within the Glebe Island Port Facilities.
See the Glebe Island and White Bay Master Plan for Future proposals for this site. 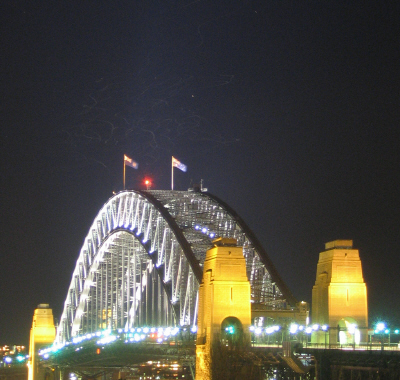 The Sydney Harbour Bridge. Photograph taken from Observatory Hill on 25 July 2005. Note the glow in the sky just above the bridge. Within this glow there are some squiggly white lines which were produced by birds flying within the upward shining light beams on this 15 second exposure. These birds are either attracted by the lights or are feeding on insects which have been attracted by the lights. The bridge floodlights are turned off at 1:00am.


Will the last one out switch off the lights